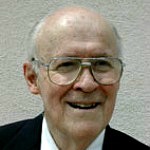 Daniel Fuller had a huge impact on John Piper when he was studying theology. Piper wrote the preface to the book I quote from in this post. This is what Daniel Fuller writes on the extent of the atonement.

“The question of the extent of Jesus’ atonement naturally arises when we think about his paying the penalty for people’s sins. If one teaches that Jesus died for the sins of everyone – even for their sins of not believing on him, then the door is open to the false teaching that everyone will finally be saved (i.e., universalism), for God would be unjust to punish people for the very sins for which Jesus already paid the recompense. But Jesus spoke of his laying down his life for his sheep (John 10:15), which implies that he did [p. 221 begins here] not recompense the sins of those remaining impenitent, who refuse to be his sheep. Also Heb. 10:14 speaks of Jesus’ sacrifice as having been made for all who are being made holy, which would exclude those who remain condemned.”

“Coherency on this subject is attained when we understand those verses teaching that Jesus died for all (e.g., 2 Cor. 5:15; 1 Tim. 2:6) to mean that he died for all without respect to any special distinctives: ‘There is no difference between Jew and Gentile – the same Lord is Lord of all and richly blesses all who call on him’ (Rom. 10:12). Jesus said simply, ‘Whoever is thirsty, let him come; and whoever wishes, let him take the free gift of the water of life’ (Rev. 22:17). Thus, the teaching of an atonement of limited extent should never raise the fear in anyone that Jesus did not die for his or her sins. That a person wants Jesus’ forgiveness is evidence that he or she is one for whom Jesus died, and such people should be encouraged to repent and believe in order to be saved” (emphasis is always in Fuller).

Here is the link to when Fuller spoke at a Desiring God conference.

Here is a link to a relevant Solid Joys meditation of Piper: Devastated and Delighted (e in italiano Devastati e beati).

2 commenti su “For whom did Christ die? Daniel P. Fuller”